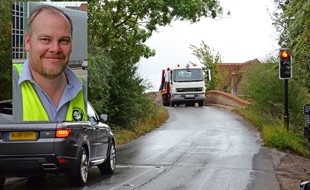 The 200-year-old Ivinghoe Bridge, near Cheddington, is to be repaired and strengthened following a structural review.

The work, originally planned for January, has been rescheduled to start in the autumn following an ecological survey that identified possible bat nesting sites. Further bat activity surveys will now have to be carried out during the breeding cycle until September.

The Canal and River Trust, which owns the bridge – known locally as Brownlow Bridge – that carries the B488 across the Grand Union Canal, undertook a review following concerns about its structural condition.

Transport for Buckinghamshire, which checked the trust’s findings, agree it is strong enough only to handle traffic loads up to 18 tonnes, and a temporary weight restriction has been imposed on the bridge to protect it from possible further weakening.

Paul Irwin, Buckinghamshire County Council Deputy Transport Cabinet Member, said it was important the bridge works were done as soon as possible to stop any further deterioration and to maintain a structure that was sound enough to be part of the highway.

He said: ‘TfB will increase the frequency of their structural inspections and, in addition to the Canal and River Trust inspections, we’ll have a much clearer picture of the bridge’s condition to check it doesn’t get any weaker.’

He added: ‘I’ve met with a number of local people who are concerned that the bridge is being used by heavy lorries. I understand these concerns, which is why we’ve been considering ways to enforce the 18-tonne limit, and why we’re moving as quickly as we possibly can within the scope of ecological legislation to start strengthening work.’

Bridge works were being considered in tandem with a proposed longer-term area-wide plan for handling heavy lorries.

The trust is statutorily required to maintain the bridge, a Grade 2 listed structure, to carry a maximum nine-tonne weight. But as it forms part of Buckinghamshire’s road network, requiring a higher weight limit for traffic, it falls to the county council to oversee its maintenance.