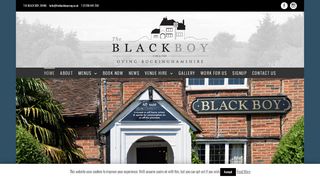 Situated in the heart of rural Buckinghamshire, 5 miles north of Aylesbury, The Black Boy was built circa 1524. The original building is still standing. The front door, bar area with beams, kitchen and living accommodation can still be seen. Various extensions and outbuildings were added in the 20th Century.

The Hossle or village pond, situated at the bottom of the pub gardens, was the only source of clean running spring water in the area during drought. Farmers with sheep, cattle or horses would walk their animals from miles away to the spring, which is still as abundant today. It is rumoured that Oliver Cromwell and his New Model Army camped in the pub garden and hossle after sacking nearby Bolebec Castle at Whitchurch.

Why the name Black Boy? There are a number of similarly named pubs across the UK but the origins of the name is not clear cut. The most common belief is from when Charles II (1660-1685) was in exile his dark complexion earned him the nickname The Black Boy.

Paul Mitchell is delighted to have taken over recently and is excited about continuing to support the local community by providing a fantastic place to meet, relax and enjoy a drink and fantastic fresh, seasonal food.

Quintessential English pub with some of the most stunning views in Buckinghamshire, which can be enjoyed from our large garden. Warm and welcoming staff on hand to help you with our seasonal pub menu

Located in the popular English village of Long Crendon. Its picturesque cottages and period architecture make it a favourite location for the popular Midsomers Murders television programme.Combine